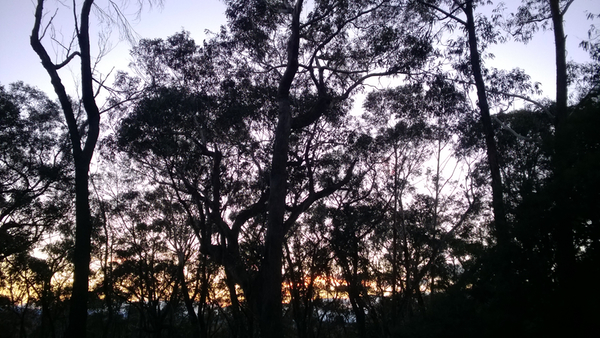 “‘Day 10’? But the last post was Day 5,” I hear you complaining. Well, the dynamic of my Nokia Lumia 925 / Windows Phone 8 trial changed a bit last week, so I’m skipping over the dull bits.

Day 10 is Thursday 8 August 2013, and the photograph with this post was taken one minute before dawn on that day.

In the intervening days, I had continued to use the Lumia 925 much as I had been, and I continue to appreciate the quality of the camera and the ability to customise the start screen in Windows Phone 8. It makes the iOS grid of icons look positively old-fashioned.

However you may remember that I was having trouble with the Wi-Fi link dropping out when the phone was physically handled. Well, I put that question to Nokia and Microsoft on Monday.

Here’s what I asked:

During my trial of the Nokia Lumia 925 / Windows Phone 8, I’ve used the device heavily as a Wi-Fi hotspot. All too frequently — indeed more often than not, when I’ve physically handled the phone, the client devices have lost their Wi-Fi connection. It re-establishes a few seconds later.

Windows Phone 8 calls this feature “internet sharing”. When the 3G/4G data link dies for any reason — poor signal, or maybe even some sort of issue like that one Apple had with the iPhone that time — the phone decides that without an internet to share, it’ll stop bothering with Wi-Fi to connect to it.

This is in contrast to my Samsung Galaxy S III 4G running Android, which treats the 3G/4G link and the Wi-Fi link as independent network interfaces.

This is all mere supposition on my part, but the questions I’m putting to both Microsoft and Nokia are:

I’m after an on-record response, and I’m keen for as much technical detail as possible because, well, I can understand it.

And here’s the answer I got from Nokia:

We have run similar tests internally and if 3G or 4G connection is lost, it does not drop the Internet sharing connection.

As a next step, we’d like to replace your handset and conduct further tests to see whether it is an issue with this particular handset.

Microsoft has not yet responded.

So, on Thursday I got a new handset from Nokia’s external PR firm in Sydney — that new dawn photo was chosen to symbolise that — but I’ve been too busy to move my workflows back to that phone. I’ll do that today, and let you know how I go.

While I could reproduce the Wi-Fi dropouts easily on the first handset, no-one else has experienced it. It would be unfair to criticise the phone for a one-off manufacturing fault, and I note that it’s version 1.0.0.0 of the hardware, so I suspect I was just unlucky. Stay tuned.

The trial has therefore been extended until the end of Tuesday 13 August 2013, because I also want to check out some more of the apps, though posts may take longer than that to be published.