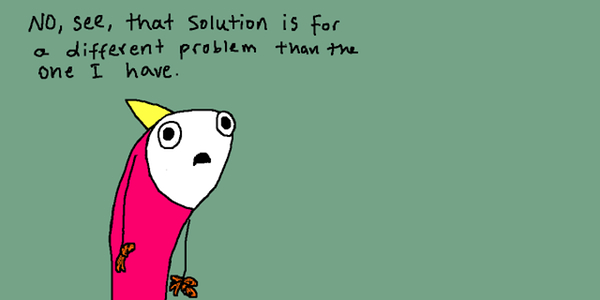 You don’t always notice when Depression steadily, stealthily infiltrates every crevice of your mind, leeching out the colour and joy and inspiration. (It’s an ankle of a thing, but it still deserves a capital letter, right? Respect.) And when you live by yourself, as I have for most of the last two and a half years, you don’t notice when your routine drifts out of step. There’s no-one to raise an eyebrow at your increasingly bad habits.

Being a freelancer, rather than an employee working within some sort of structure, makes it worse.

No, you only notice when — eventually, inevitably — you do some utterly fucked-up thing that slams reality back into your face like an unplanned pregnancy.

Then you spend the next few hours, or days, staring into the abyss. Shaking is also traditional at this point. And pacing. Also, not pacing, but just sitting.

As you’ve probably guessed, all this is leading to the fact that I’ve recently done one of these utterly fucked-up things. One night last week, in fact, although it was more a thing I said rather than a thing I did.

I still have no idea how the conversation went where it did. I had no plan or intention to go there. The specifics aren’t important to anyone but those directly involved, so I won’t be telling you what actually happened. In any event, there are… memory gaps.

Planned or not, the next morning I was in full utterly-fucked-up abyss-staring mode and thinking, upon reflection, that maybe the familiar old black dog had recently been a bit more vicious than usual, and perhaps even more than I’d realised. Maybe I should check that out.

So I did check that out, using the K10 Depression and Anxiety Checklist, a standard diagnostic tool. The result was “high”. It “strongly recommended” that I see my GP or someone. And it listed crisis counselling line numbers.

So I went to my GP and told him the score.

I detect a pattern here.

And so began a “management process”, as the euphemism goes. Familiar territory, yes, but it still means an erratic few weeks ahead as the mind is re-tweaked back to more appropriate levels of serviceability. The fucking things should come with a service manual, you know!

So why am I telling you all this highly personal stuff? Two reasons.

Firstly, it saves me having to tell the story over and over again. I can just point people here to explain why Things Did Not Get Done in recent times.

Secondly, and more importantly, because men are less likely to talk about their state of mind, and that increases the risk that their depression or anxiety will go unrecognised and untreated.

Depression is a high risk factor for suicide and, in Australia, there are approximately 2,200 suicides each year. 80 per cent are by men — with an average of 5 men taking their lives every single day. Suicide is the leading cause of death for men under the age of 44, significantly exceeding the national road toll.

To be clear, I was not and am not suicidal. I mean, everyone standing on the platform at North Sydney station of a late afternoon wonders, every now and then, what it might be like to take that one small and oh-so-easy step into the path of an approaching train, right? Surely it wouldn’t hurt that much. And anyway, the train drivers get counselling afterwards so it’s all cool.

But look, my point is that us blokes should know better, yet we never learn. That’s not so smart.

Over the years, I’ve experienced a handful of somewhat disruptive episodes of Depression, or anxiety, or post traumatic stress disorder, or whatever label you think it needs to give your life a coherent narrative. I’m certainly familiar with the process of going into the hole, and the process of finding my way out again.

So you’d think that when I began 2011 in fear; then had one cat fall gravely ill and, soon after, I chose to end her life; then launched into accommodation unknown; then the other cat escaped from his lodgings, never to be seen again; then I had questions about my media work; then saw budget cuts; then there were more questions and declining revenue; and all the while, in parallel, Certain Personal Matters caused difficulties about which I do not speak — with all of this, do you think I saw the need for corrective action, and took it?

Because the complete ankle of a thing that Depression is, it just doesn’t work that way.

You don’t notice until you’re all the way back in that full utterly-fucked-up abyss-staring mode again.

Guys, it’s not the way you should be doing it. I was once told that as you get older, the responsible thing to do is help teach the next generation. If you can’t be a role model, then at least serve as a dire warning.

Anyway, so here I am. The diagnosis and choosing to start fixing things is the most important step. I’ll attempt to undo the damage caused by the utterly fucked-up thing. I’ll start dealing with the disruption the Depression itself has caused — mostly that’s about doing some actual planning for my future, instead of just letting things drift along. Whether I continue with status reports or not has yet to be decided.

OK, this blog post just runs out now. There isn’t a proper ending. So I’ll finish by saying thank you to Nurse Tina, who introduce me to Hyperbole and a Half, a blog about Depression (mostly) by Allie Brosh. That’s her image up the top. If you read her posts Adventures in Depression and Depression Part Two you’ll get a bit of an idea of what Depression is actually like. The second one is where the fish reference comes from.

Update 13 July 2013: I’ve had a couple suggestions for things to add to the resource list. They are:

It’s an odd simile, no? Well, I was stuck for inspiration. I didn’t want “slapped in the face like a wet fish”, and when I consulted Google it wasn’t terribly helpful.

So I asked on Twitter, “‘[an event] that slams reality back into your face like an X’, sure, but what is X?”, and got suggestions including anvil, meteor, X-TREME [huh?], my balls, slice of lemon wrapped etc, rake in grass, unplanned pregnancy.

“I think I might go with an unplanned pregnancy. Thank you, @shipw,” I tweeted.

[Illustration: An image from Allie Brosh’s post Depression Part Two at Hyperbole and a Half, used under a Creative Commons Attribution-Noncommercial-No Derivative Works 3.0 United States License.]

11 Replies to “My fish are dead: the black dog ate them (an explanation?)”