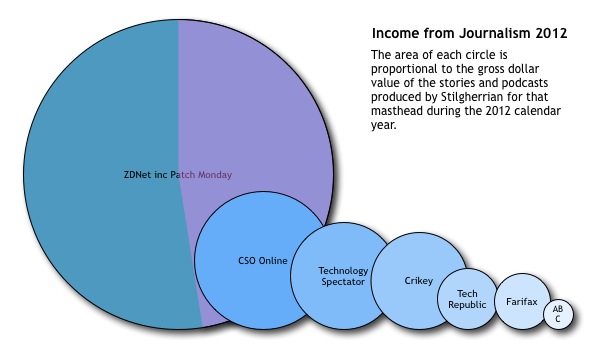 Last year I wrote more stories per month for CSO Online. But after that spectacular start Enex TestLab, who pays for my stories to use as part of a package of content they sell to CSO Online, dropped back to a commitment of two stories per month. What’s more, while the stories are nominally paid at the standard Australian technology press freelancer rate of 50 cents per word, the articles are capped at 500 words. That’s awkward.

The natural word length of an analysis or opinion piece seems to around 700 to 900 words, and sometimes even 1000 or 1200 words. You need to introduce the topic and your evidence, frame your argument convincingly, and perhaps speculate about the future.

Sometimes it’s possible to argue a case in fewer words, but it’s more work to distill it down to 500 words — and you get paid less for it.

Conversely, while 500 words is handy enough for a straight news piece, if you’re only doing two pieces a month then you can’t follow any evolving stories with any coherence. What do you do if a story presents more than two new developments in a single month? Or if things happen in more that two story threads? Whatever you choose to do in these cases, You’ll end up looking a goose.

It’s precisely this kind of analysis that will be informing my decisions.

It’s not just about the price paid, though. There’s also the different amount of work it takes to write different kinds of material, and the levels of tight-deadline stress attached to different mastheads’ workflows.

There’s the different levels of support, ranging from the to-and-fro of questions and comments from Sydney Morning Herald opinion editor Joel Gibson that results in much better pieces of writing, to the mastheads that often don’t even acknowledge receiving the story before deadline and, with minimal sub-editing, publish your material with typos and logical flaws intact.

There’s even the masthead’s relative prestige, for want of a better word. I’m not talking about the “You’ll get exposure if you write for free” bullshit peddled by exploitative parasite editor Mia Freedman and her kind. But a story about the politics of technology will reach more real influencers, in the original meaning of that word before it was hijacked by internet snake-oil merchants, in Crikey than it will in ZDNet. Sometimes that’s of more value than ZDNet paying significantly more money.

The second picture shows how many stories I wrote for each masthead per month during 2011 and 2012. 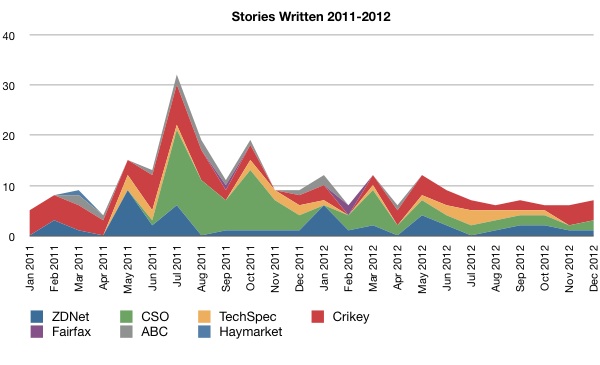 There’s plenty to note about this chart, not least being that “one story” could be anything, from a quick opinion piece on a familiar topic that takes an hour to write, to a 1500-word feature that takes days. And of course it doesn’t take into account the different pay rates.

Haymarket Media is included for the single story I wrote for CRN last year, Two chefs, Next G and the ‘wireless’ confusion.

The work for TechRepublic has been rolled in with ZDNet, and the Patch Monday podcast hasn’t been included at all.

None of my non-journalism work is included either. Speaking at conferences and other events saw a significant rise in the second half of 2012. The hands-on geekery I still do for certain clients is declining. And this year I even provided technical advice for a new TV drama that involves hackers.

Further versions of the chart will fix some of these problems.

But it does show the massive difference in activity levels between 2011 and 2012, including the surge of stories for CSO Online in green in the second half of 2011. It also shows the irregularity of contributions to the Sydney Morning Herald and ABC’s The Drum, the last work for them being in February and April 2012 resepctively.

Many of these irregularities are down to me not pitching to editors. I’ll fix that in 2013.

Indeed, this whole process was triggered by the realisation that I’ve just let my work grow in a completely unplanned and unstructured way these past couple of years. I reckon I can get a better result by doing some, you know, planning.

I’ll keep blogging this stuff as I go along. Meanwhile, if you have any comments, questions or highly-paid writing commissions, you know where to find me.

3 Replies to “Doing the business on Stilgherrian’s journalism”