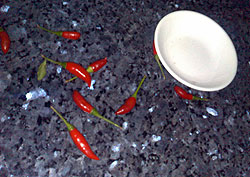 I was going to tell you about Projections 2007 — a photography competition whose finalists were shown tonight at the Chauvel Cinema. Billy Law’s “Pumping Iron” series was one of them, and there was some very cool stuff indeed.

But… the Projections 2007 website still reads as if tonight hasn’t even been planned yet, and the only details online are the event announcement. So there’s no pretty pictures to link to and rant about.

So instead I’m going to tell you about the cats.

I’ve already descended to the level of blogging about pets by telling you that Artemis caught a Noisy Miner. So this week you need to know about Apollo and the chillies (pictured at left). But I won’t bother with a detailed story because such domestic trivia is really, really boring.

Suffice it to say that I wanted the freshly-harvested chillies — from our own garden! — to stay in the white bowl. Apollo had other ideas. Four times. And I took a picture.

Now you really do need to bow down before me and worship me as your god.