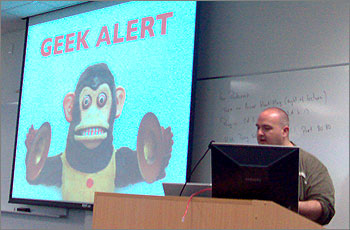 Beer. Yes, it needs to be said. Beer. More precisely, beer and geeks. Many of both. This is my clearest memory of yesterday’s PodCamp in Perth. Other memories may return shortly, once coffee and udon work their magic. Many brain cells will not. I bid them a fond farewell.

Nick Hodge has posted a much better lead photo for PodCamp Perth, showing Cameron Reilly’s passionate opening keynote, replete with a vast image of Che Guevara. It helped me feel more comfortable using an image of Joseph Goebbels in my own session.

I’ll explain the Goebbels reference when I post a version of my presentation. I’d prefer to post something of lasting value, not a raw dump, so it might take a couple of days. Plus I want to continue the dialogue I started about social media and the federal election.

I’m also writing a piece for Crikey tomorrow, and I’ll post a version here too.

I won’t bother listing the sessions. Nick and others have already written their initial impressions, including Cameron Reilly and Simone van Hattem and Michael Minutillo… I’ll complete all the linkage later too.

But for now, a rest and a read before catching up with people at the Belgian Beer Cafe. Yes, beer. Again.