I’ll be in Perth on 27–28 October for PodCamp, the New Media Community UnConference, where I’m presenting a session on Social Media and the Federal Election. 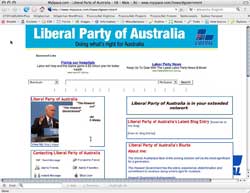 While my first visit to Perth will be fun enough, I’m also enjoying researching my presentation. Australian politicians really don’t have a clue about this stuff.

Starting at the top of the food chain, John Howard’s MySpace profile is a disaster. The screenshot (right) records how it looked this morning — with a a broken rectangle obscuring part of the photo and adverts for the Labor party. Click for the full-size version.

MySpace is the world’s largest and best-known social media operation. Yet this profile doesn’t have anything to offer apart from a recycled media release. No blog entries. Not even any personal information beyond Howard’s age — reminding MySpace’s relatively youthful audience that he’s “old”.

At the other end of the spectrum — in more ways than one! — is Australian Democrats Senator Andrew Bartlett. 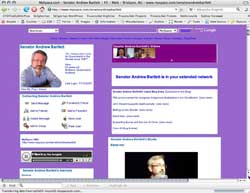 He’s been blogging at The Bartlett Diaries since August 2004, and his fresh, personal style provides an engaging look behind the scenes in Canberra.

OK, it still looks crap. That’s MySpace for you. But we learn that he listens to Joy Division and Nick Cave and the Bad Seeds. He likes movies like Brazil and Team America: World Police. He’s adding blog entries, some of which are from only a few days ago. He’s making a real connection with people and, most importantly, giving them a reason to come back.

John Howard has 9 MySpace friends — one of whom is “Tom”, everybody’s default friend. Senator Bartlett has 718.

Unfortunately, most Australian politicians use social media like John Howard, not Andrew Bartlett.

I’ll be adding further thoughts over the next week as I prepare for PodCamp. But meanwhile, some questions for you:

3 Replies to “Politicians and Social Media: a catalogue of cluelessness”