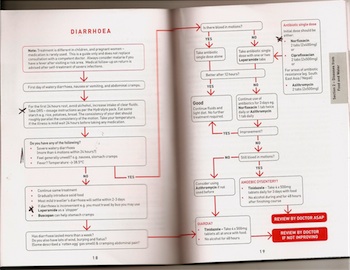 Yesterday I was given a, erm, flowchart for diarrhoea, if you’ll excuse the phrase. I’d never realised that diarrhoea needed an instruction manual.

I was also given my vaccinations, as foreshadowed. And it’s all on video, to be published later.

Speaking of video, my diary entry is rather subdued today. Yes, vaccinations do make one feel crap. But I manage to talk about diarrhoea, and about how the online conversation about this project is already taking on a life of it own.

I’ll get that video online as soon as Viddler stops spitting the dummy.

ActionAid face an interesting challenge in taking on this project.

Their message is no longer being delivered through what the estimable Bronwyn Clune calls control media or what I usually call industrial-age media. They’re now participants in a social media conversation. Everyone in that conversation is a free agent, capable of saying what they wish — including myself.

ActionAid will have to overcome the fear of losing control.

Of course, as I explained in The Importance of Authenticity, they’ve never had control over what other people might say. It’s just that now all those ephemeral conversations are visible to everyone on the Internet. It’ll be interesting to see how a traditionally-structured organisation like ActionAid handles this new environment.