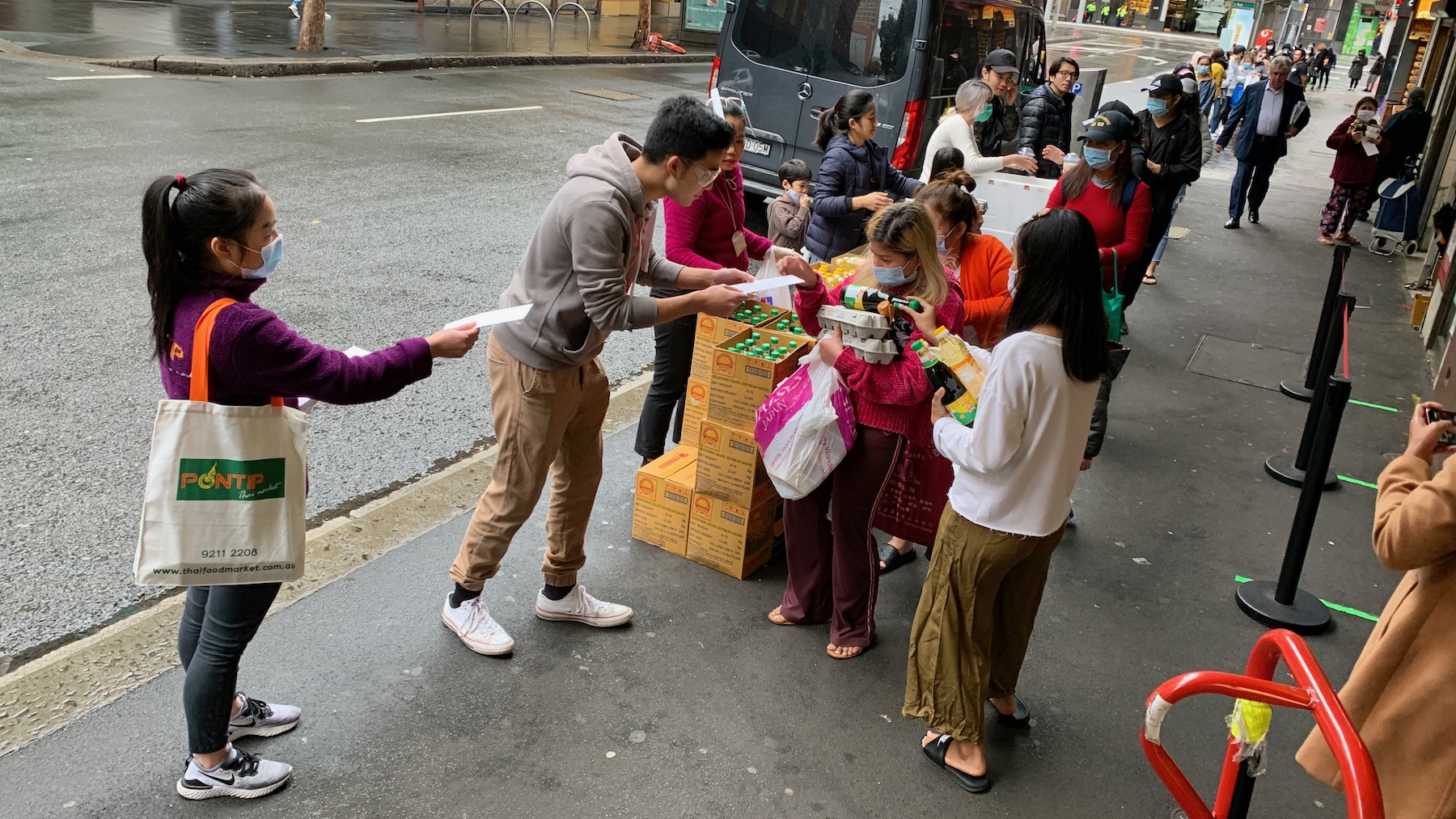 In my week of Monday 18 to Sunday 24 May 2020 I shed a tear when I saw how some of our international students are having to be supported by ad hoc community charities. Our governments have failed.

That photo up there? I tweeted it on Thursday and since then it’s attracted a bit of attention.

That’s Campbell Street in Sydney. It’s at the core of Sydney’s Thaitown, which runs for roughly a block each west, north, and east of the intersection of Campbell and Pitt Streets.

It’s week 10 of the COVID-19 lockdown. Many of the young people in the local Thai community are international students. During the lockdown their usual jobs in hospitality or retail or cleaning or personal services have disappeared.

International students aren’t eligible for the federal government’s JobSeeker allowance (unemployment benefits) or JobKeeper (COVID-19 employer wage subsidies). They can’t “go home” because there’s almost no international flights, and those that do exist are priced beyond their means.

In short, international students are stuck with no income in one of the world’s most expensive cities.

In mid-May the NSW government eventually announced a $20 million package for things like temporary housing, but only to those who have effectively exhausted their resources — with less than $1500 remaining and no other means of support.

For the most part, though, supporting these students has been left to ad hoc community groups such as the wonderfully named Turbans 4 Australia. These groups are random collections of local businesses, sometimes with local government support, sometimes with the support of existing food redistributions charities like OzHarvest.

My photo shows such a group queueing for support outside Pontip Thai Market, which I believe was the grocery store that was the seed from which Thaitown grew. The envelopes being handed out at the end contained a small amount of cash.

As the Guardian reported last week:

About 20 Thai restaurants are now taking turns providing free meals to students, said [Weeraphan Vibulphan], including the restaurant Chat Thai. “We try to help them with dry food, rice, sometimes we give away hot meals for them,” he said. “We all know each other, it’s quite a small community.”

[Weeraphan] said students were notified via a Facebook page and the restaurants usually gave away 100 food boxes a day.

That’s what I saw on Thursday. A small group of people handing out what they’d brought in a single charcoal grey delivery van. The queue stretched back along Campbell Street, around the corner into George Street, and back inside a shopping arcade.

Distribution started at precisely 1pm. I turned away to tweet my photos at 1.11pm. I turned back, and the entire scene had already disappeared.

Sydney’s small, tight-knit Thai community does what so many Thai communities do: spread the word that help is needed and it somehow just happens. It’s the very best kind of chaos. It’s why during Bangkok’s floods of 2011 ’Pong was one of those former locals wading through the flooded streets delivering food and drinking water.

But students in one of the world’s richest cities shouldn’t have to rely on the beautiful chaos of random handouts from their local business community.

Australia and New South Wales and Sydney are more than happy to enjoy international students’ money and labour and taxes in the good times. Why are they being ignored when things get tough?

As for me, well, if you’ve been listening to the podcasts you’ll know that I’m doing OK. Mostly. I’ll tell you more in the next episode.

OK well I didn’t get a lot done this week. The Quarantimes are strange.

None, but thanks as always to the new and returning supporters who hit the tip jar. You’re more than welcome to do the same. I really do appreciate it in these strange Quarantimes.

It’s not corporate largesse, but a belated birthday gift. I seem to have lost my soft-toy quoll Nate ‘King’ Quoll. Now I have not one but two replacements!

The large one has been named Alan Quoller, after Australian financial journalist Alan Kohler. I’m instructed to let him stay at home and leave the smaller one to go on adventures. I have therefore named him Quolliver, so that I may report his adventures as Quolliver’s Travels.

The isolation continues at Bunjaree Cottages at Wentworth Falls, and I’ll continue to attempt to catch up with my writing for ZDNet.

On Wednesday I’ll dip into the Lowy Institute discussion In conversation with Carl Bildt and Michael Fullilove. Bildt was Sweden’s foreign minister from 2006 to 2014 and prime minister from 1991 to 1994, amongst other things.

There will be another His Plague Diary episode of The 9pm Edict late in the week.

There’s still almost nothing scheduled for certain. These conference dates are tentative.

[Photo: COVID-19 Charity in Thaitown. I cried after taking this photo on 21 May 2020, but I’ve already explained all that.]