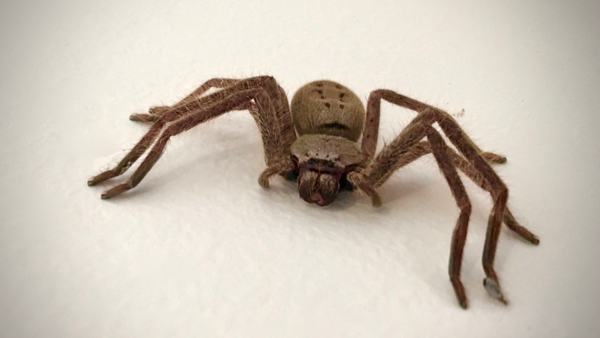 There’s a decent-sized huntsman spider in the house. Here’s a picture from 4 January. The curtain rod is about 2.5 or 3cm in diameter.

Last night, I saw a huntsman spider up in the corner of the bedroom wall, near the ceiling. I didn’t think anything of it. Later, I’d turned out the lights, and was just watching videos on my iPad — calm down, just BBC light entertainment — propped up on the bed beside me. The screen was the only light in the room.

I moved my arm a little to adjust my position. I’d been lying on my side a while, you see. I felt something brush my wrist, and assumed it was the bedsheet. But no. Silhouetted by the light of the iPad’s screen, I saw a huntsman spider crawl along my forearm and up my wrist, up across the screen, and over and down the side in the dark.

I calmly* put down the iPad, brushed my hand gently* into the dark, and languidly* rose to a standing position, and turned on the light.

SITREP: Me, standing naked. Spider, sitting on the bed next to the hastily-dropped iPad, and showing no sign of moving any further.

It was a standoff. Then I noticed that the spider I’d seen before retiring was still up on the wall.

THERE WAS A SECOND SPIDER.

I went to the kitchen to find a glass and a piece of card to do the usual trick of collecting the spider and taking it outside, but there wasn’t anything quite big enough convenient to hard. I decided, therefore, to chase it away into a corner or something. But whenever I banged my hand nearby, it just leapt back a few centimetres, and turned to face me again.

I was going to take me on!

I am sorry to say that by now I just wanted to go back to bed, so I resorted to chemical warfare. A long, long spray of fast-knockdown bug death juice. I still feel bad about this. This spider had done nothing to deserve capital punishment.

The spider was now drenched in poisons. But rather than curl up and die, it decided to scale the wall above the bed to escape!

I knew I couldn’t get back to sleep with the spider hanging above my head, so I moved the bed about a metre out from the wall, and tidied things up. I gave it another spray. I felt really quite bad now.

Eventually, the spider showed signs of being affected. Its movements slowly became unsteady. It wasn’t sure where it was going. Even though it had been drenched in “fast-knockdown” poisons, the huntsman spider took more than half an hour to die. It finally stopped moving, and plummeted to the floor. It left a crater about three metres across and a metre deep.

All this time, the first spider sat motionless up by the ceiling.

I went to sleep, but only slept fitfully. I woke to the slightest sound or movement in the room.

When I finally woke up properly this morning, the first spider was nowhere to be seen. I still don’t know where it is.

[Photo: Huntsman. A species of huntsman spider photographed near Wentworth Falls in the Blue Mountains on 24 January 2018.]