But for me, that first image is the killer. The pink blouse! Those alluring eyes! The hair!

The densest concentration of Leena posters is around the Chatuchak weekend markets — a massive concentration of more than 15,000 stalls over 1.1 square kilometres where it would seem Leena has her strongest support base. She’s seen as fighting for the poor and “ordinary people”, people such as the stallholders, and fighting against corruption.

I guess she’s a bit like Pauline Hanson without the racism. Or a left-wing Bronwyn Bishop, if that’s possible. 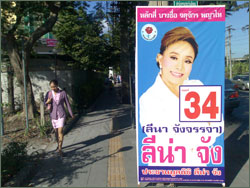 Apart from the legal foundation and her political ambitions, Leena runs a cosmetic business.

One of ’Pong’s friends, a political journalist, tells me Leena doesn’t have a hope in hell of getting elected. Still, she has profile.

It was interesting hearing the Thai perspective on Australia’s federal election, which took place only a few days before I arrived in Bangkok. While many Australian commentators were talking about “Me-too Rudd”, supposedly identical to John Howard in all significant policies, Thai commentators could see real differences.

One late-night talk show host was even jealous that Australians had choices. Thais, he said, could really only choose between different sets of cronies. Rudd, he said, was very different from Howard: he was signing Kyoto, getting out of Iraq and apologising to the Aborigines. The me-too of economic issues didn’t get a mention.

And yes, Chairman Rudd’s skills in Mandarin were mentioned a lot in the newspapers, as was the Malaysian heritage of our Minister for Climate Change, Senator Penny Wong.

Whichever set of cronies gets elected tomorrow, they’ll be engaging with an Australia whose eyes are, once more, on the region instead of being focused solely on Washington. I get the feeling they’re expecting big changes.

One Reply to “Unreliable Bangkok 4: Lust”